Description: This is a scenic 200 kilometer route through rural roads from Bingen to the west flank of Mt. Adams and back. The total elevation gain estimated from bikely.com is 7,700 feet. The route has three significant climbs, from BZ Corners to the Glenwood valley, from Trout Lake to the peak elevation of 4,100 feet on way to the Lewis River, and the last major climb from the junction of the Lewis River and FR-88 to the FR-88-150 junction. The Forest Service roads can be a bit rough with cracks and potholes. Watch out for bumps when approaching the bridges on the Lewis River road.

There are no domestic water sources in the 52 mile section of the route north of Trout Lake and there is no cell phone service. Trout Lake has a variety of services. There are many good views of Mt. Adams and Mt. Hood. The forest types vary from east to west and high to low elevation. The route traverses the Cascade Crest and includes low elevation fir, ponderosa pine, Douglas fir and high elevation mountain hemlock, noble fir, and silver fir. 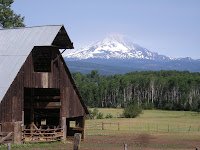 Update 30-AUG-2008: David ReadyToRide and I rode the Bingen-Lewis River route completing the ride in 9h30. The weather was cool and windy. The temperatures were coldest near the top of FR23 where ReadytoRide noted his bike computer read 51 degrees Fahrenheit.

We found most of the roads very quiet with nil traffic. Traffic was normal on the last 23 miles of the ride from Trout Lake to White Salmon. 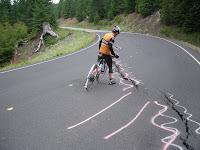 There were a few road condition issues. The FR23 road has some major slumps south of the FR90 junction that are marked with pink paint or road signs. There are also some major slumps on the FR90 road just past the 23 Junction. The FR88 road is narrow, only single lane in places, so riders need to watch for oncoming traffic. The FR88 road also has some short washouts and short lengths of gravel as well as some pot holes in the lower portion of the road near FR90. The roads otherwise were in very good shape. The abrupt bridge edges appeared to have had some asphalt added so they do not cause such a harsh bump.

My Garmin Vista Etrex hcx gps recorded a total elevation gain of 7,700 feet exactly matching the Bikely profile. About 70 percent of the elevation gain is in the first 100k. There were only 4 hills of significant note. The hill between BZ Corners and Glenwood starts at mile 12.9 and is 6 miles long with a 1.5 mile flat through the Gilmore valley in the middle. The maximum slope is 10 percent and the average slope is 4.25 percent. After Glenwood at mile 37.6, there is a three mile hill past Quigley Butte with a maximum slope of 7 percent and and average of 2.5 percent.